Authored by Elisabeth Gawthrop on April 23, 2018

The World Meteorological Organization’s Commission on Climatology (CCL) honored Simon Mason, IRI’s chief climate scientist, with its 2018 Award for Outstanding Service. The award was presented in Geneva on April 10 by Thomas C. Peterson, the outgoing President of CCL. 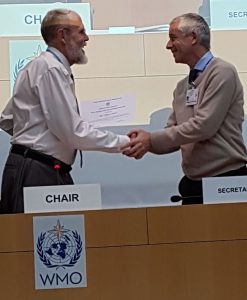 In a letter, Elena Manaenkova, the Deputy Secretary-General of WMO, wrote the award was, “in recognition of his exceptional contributions to the Commission and particularly in training activities at the regional and national levels including as a longstanding contributor to the Regional Climate Outlook Forums and the lead for development and support of the Climate Predictability Tool (CPT).”

CPT is a freely downloadable statistical application that lets users produce customized seasonal forecasts quickly, easily, and without the need of powerful computers. While the primary purpose of CPT is to help countries produce their operational seasonal climate forecasts, it is also used experimentally and in research for applications ranging from fog forecasting to investigating the climate influences on infectious diseases. CPT is used by meteorological services and research centers around the world.

Mason has traveled to 76 countries for IRI, and he’s conducted trainings with meteorologists, climatologists and hydrologists coming from nearly 150 countries in the use of the Climate Predictability Tool. The trainings include methods of empirical prediction and downscaling, model validation and forecast verification, deterministic and probabilistic prediction, forecast tailoring and communication.

Mason was born and grew up in England and has worked on seasonal climate forecasting since the late 1980s. He worked for and then owned a mathematical software company in South Africa, at which he obtained the skills for developing CPT.  He started at IRI in 1997 and, with current IRI Director Lisa Goddard, helped make IRI’s first forecast in October of that year.

“Simon gives such depth of thought and intention to everything he does; he is an excellent scientist, collaborator, and global citizen,” said Goddard. “I am continuously impressed by his commitment. He positively impacts everyone, and every project, that he encounters.”

Peterson also cited Mason’s leadership and service on many task force teams of the Commission and his leadership in IRI’s partnership with the International Federation of Red Cross and Red Crescent Societies (IFRC).

The IFRC’s Red Cross Red Crescent Climate Centre has been a close partner of IRI. The partnership led to the first ever advance action by IFRC to prepare for flooding based on a seasonal forecast, and the Climate Centre now uses the IRI/IFRC Map Room to monitor and predict heavy rainfall and mitigate food risk around the world. The Climate Centre is led by Maarten van Aalst.

“The WMO could not have chosen a better recipient for this award,” said van Aalst in an article from the Climate Centre.

“I’ve personally relished not just his scientific excellence and his focus on making climate services truly useful for the people who need them, but also his communication skills and sense of humour.”

The award is given to two people every four years at the meeting of the CCL. The other 2018 awardee was Lisa Alexander, a professor at the University of New South Wales in Australia. The Commission for Climatology advises and guides the activities of the World Climate Programme and plays a key role in implementation of the Global Framework for Climate Services (GFCS).