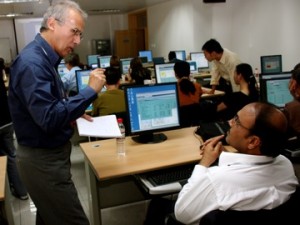 The Climate Predictability Tool (CPT) is a software package for constructing a seasonal climate forecast model, performing model validation, and producing forecasts given updated data. Its design has been tailored for producing seasonal climate forecasts using model output statistic (MOS) corrections to climate predictions from general circulation model (GCM), or for producing forecasts using fields of sea-surface temperatures or similar predictors. Although the software is specifically tailored for these applications, it can be used in more general settings to perform canonical correlation analysis (CCA), principal components regression (PCR), or multiple linear regression (MLR) on any data, and for any application.

Comments and requests for changes and developments, or access to the source code can be emailed to ude.aibmuloc.irinull@tpc.

PyCPT has recently been created as a new and easy-to-use Python interface to CPT. Under continuous development, this set of libraries enables the user to run CPT via Python scripts and Jupyter Notebooks, helping automate and mass-produce CPT tasks that will normally take more time in the Windows version. The seasonal and subseasonal versions of PyCPT provide seamless access to the North American Multi-Model Ensemble (NMME)  the Copernicus Climate Change Services (C3S), the Subseasonal-to-Seasonal Prediction Project (S2S) and the Subseasonal Experiment (SubX) Databases, respectively, via the IRI Data Library. This guide provides an introduction to using PyCPT for subseasonal forecasting.

CPT is the main tool used to implement the Next Generation (#NextGen) system to produce calibrated forecasts at multiple timescales, following the World Meteorological Organization standards.