Authored by Elisabeth Gawthrop on June 11, 2018

A series of three recent training workshops has improved the forecasting capabilities of the Bangladesh Meteorological Department (BMD), while also helping to deepen the relationship between BMD and Bangladesh’s Department of Agriculture Extension (DAE). The activities pave the way for new climate information products developed especially for DAE’s needs, and ultimately to help the farmers it serves. In a country where nearly 90% of rural households rely on agriculture for at least part of their income, improvements in agricultural practices based on climate information could lead to improved livelihoods for many in Bangladesh. 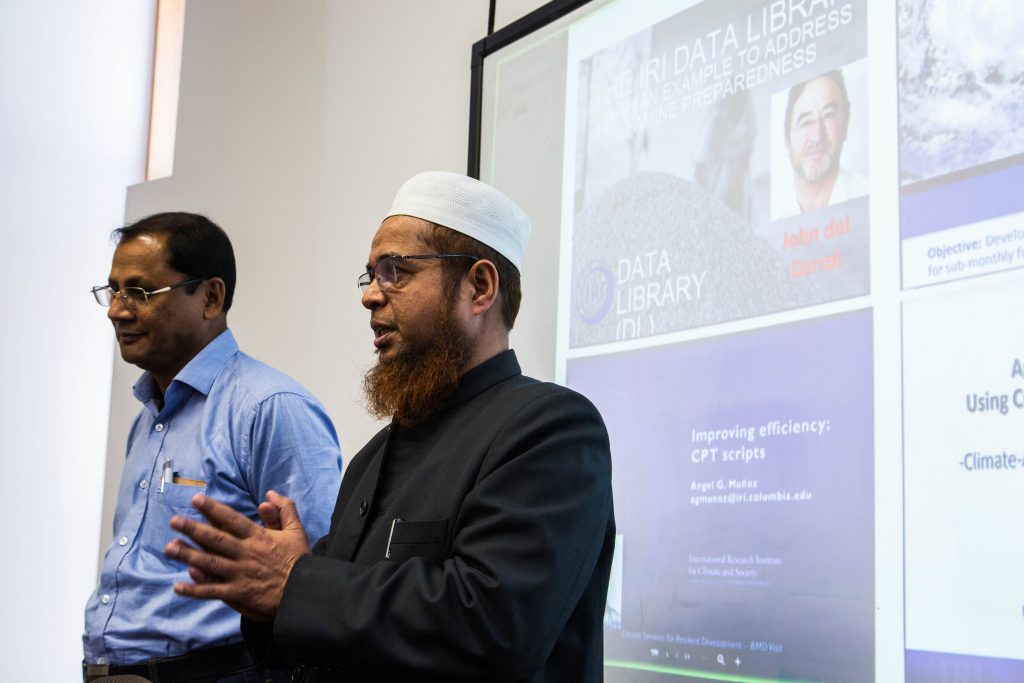 Shahab Uddin (center), an agronomist from Bangladesh’s Department of Agriculture Extension, and Abdul Mannan (left), a scientist at Bangladesh Meteorological Department, speak to staff from DAE, BMD, CIMMYT and IRI about what was learned and discussed in the training, and what the next steps are for the project. Photo: Elisabeth Gawthrop/IRI

The trainings were sponsored in large part by the USAID-funded project Climate Services for Resilient Development (CSRD) in South Asia and Bangladesh, which focuses on improving climate information tailored to the agriculture sector. The International Maize and Wheat Improvement Center (CIMMYT)leads the project, which includes Columbia University’s International Research Institute for Climate and Society (IRI), as well as BMD and DAE as major partners.

The most recent training was held for two weeks in March 2018 at IRI’s headquarters in New York. In addition to the CSRD support, contributions to the curriculum for the March training were made through the Adapting Agriculture to Climate Today, for Tomorrow (ACToday) project. ACToday, funded by Columbia World Projects, also connected the participants from Bangladesh to the different groups within IRI, discussing topics such as climate and health, flash floods and index insurance.

“In the south there is the Bay of Bengal and in the north there are the mighty Himalayas. Due to this geographical situation it is very difficult to predict some weather events in Bangladesh.” – Quamrul Hassan, Bangladesh Meteorological Department

The trainings began in November 2017 with BMD staff and included foundational climate science concepts, such as how to verify and calibrate forecasts, as well as tools for improving the efficiency and quality of forecasting. In the extended March training, for example, BMD scientists learned to use a new, automated version of the Climate Predictability Tool.

This software, used by meteorological services around the world and developed by IRI’s chief climate scientist Simon Mason, helps forecasters streamline their forecast production. The automated version increases the quality of the forecasts and saves time, said Abdul Mannan, a BMD scientist. For each forecast issued, a scientist may look at a number of variables and climate model outputs, such as sea-surface temperatures in various regions of the world’s oceans or model wind fields, to be predictors of the coming months’ climate in a certain area. Previously, working on a single such predictor would take at least two hours, said Mannan. “Now we are able to do it in 20-30 minutes,” he said. When considered on a regular basis, this time saved can permit BMD’s climatologists more time to focus on communicating climate information to partners in DAE and other organizations that are in need of climate services.

Bangladesh has a notoriously difficult climate to forecast. Quamrul Hassan, another scientist at BMD, explained that while tropical climates are generally more predictable than climates at the higher latitudes, Bangladesh is an exception. “In the south there is the Bay of Bengal and in the north there are the mighty Himalayas,” he said. “Due to this geographical situation it is very difficult to predict some weather events in Bangladesh. But still we are trying to do better and better day by day.” In other parts of the tropics, sea temperatures have a stronger effect on climate and it is easier to make long-range forecasts.

Bazlur Rashid (left) and other scientists from Bangladesh Meteorological Department at the November 2017 workshop with CIMMYT and IRI. Dhaka, Bangladesh. Photo: Elisabeth Gawthrop/IRI

Scientists and staff from Bangladesh Meteorological Department and the Department of Agriculture Extension at the November 2017 workshop with CIMMYT and IRI. Dhaka, Bangladesh. Photo: Elisabeth Gawthrop/IRI

Hassan is hopeful that based on the work done at the IRI training, they may be better able to predict sub-seasonal (i.e. two-week to two-month) climate for Bangladesh than they have at the seasonal (i.e. three-month) scale. Forecasts at the three to four week timescale are of particular interest because of their potential applicability to the needs of the agricultural sector. Bazlur Rashid, also a BMD scientist, explained that with a sub-seasonal forecast they could provide the agriculture sector with information about which week in the coming month is most likely to have rainfall. This kind of information could be useful for planning planting or harvesting activities, for example.

In addition to gaining technical expertise using IRI tools, BMD scientists also spoke of the usefulness of learning about various applications of climate services from IRI’s experts in the applied fields. “It is a very new dimension,” said Rashid. “In our country, people think that a weather forecast means it is disaster-related event. But we can apply [climate information] not only to the disaster sector but to other sectors as well, such as health and agriculture.”

Like many agriculture extension services, DAE is charged with bringing advances in knowledge, techniques and tools directly to farmers in Bangladesh, using a network of thousands of employees. The department also helps guide where and when seeds and other agricultural inputs will be available to farmers. Staff from DAE attended parts of the November training in Dhaka and the extended March training in New York.

Before coming to IRI, Rahana Sultana, an agricultural economist from DAE, said they did not have a good understanding of how climate information from BMD might fit into programs to benefit farmers. A presentation from Simon Mason about weather and climate forecasting stood out to her as essential. “From this, we now understand how and why, where and when we can collaborate with BMD,” she said.

“If I get a seasonal forecast before a season starts, then a farmer can decide what crops, what variety, and when they cultivate these crops,” Sultana said. She also expressed interest in information at the ‘weather scale’, i.e. the predicted conditions in the range of the next hours to two weeks. In the case of boro rice, which is grown in the drier winter season, three irrigations per week are generally required. “If we get information that the week’s rainfall probability is high, then the farmer can know and can decide not to irrigate the field,” Sultana said. Then the cost of production is lower and the farmer can benefit, she added.

At the March training, DAE participants identified the timing of the activities conducted in the production of several major crops, with the goal of using the resulting calendar to figure out where and when climate information could best be used.

“The crop calendar is the whole cropping structure,” said Shahab Uddin, an agronomist from DAE. “Starting with seed selection, then seed soaking and germination, then putting in the seed bed, then transplanting for rice. Then more management practices and harvesting and post-harvest activities.”

Participants during a session of the March 2018 training. Photo: Elisabeth Gawthrop/IRI

A calendar of agriculture activities for a specific kind of rice. The calendar is one tool used to figure out agriculture decisions that could be informed by climate information. Photo: Elisabeth Gawthrop/IRI

At the end of the March 2018 training, staff from DAE, BMD, CIMMYT and IRI discuss what was learned and discussed over the course of the training, as well as next steps for the project. Photo: Elisabeth Gawthrop/IRI

“In all these areas, we need climatic information. In the vegetative growth phase, we need rainfall and temperature information. In the reproductive phase of rice, we need humidity,” Uddin said. “Because if it is hot and humid, then more insects will come. But then farmers will take preparations to protect their crop from attack.” He said DAE plans to use the crop calendar to teach farmers how agricultural activities and climate information are connected.

Moving forward, close collaboration between BMD and DAE will be essential to continue to develop effective climate services for agriculture in Bangladesh. Enhancing this type of collaboration is a goal of the newly created Bangladesh Academy for Climate Services, which grew out of ACToday project consultations with BMD, DAE, CIMMYT and the International Center for Climate Change and Development (ICCCAD).

Such collaboration is easier said than done, said Timothy Krupnik, an agronomist at the International Maize and Wheat Improvement Center (CIMMYT) and CSRD Project Leader. “There aren’t incentives for cross-ministry, cross-department collaboration in Bangladesh,” he said. “But collaboration can add a significant value that we are working with IRI, BMD and DAE to strategically leverage for impact, ultimately benefiting farmers by merging agronomy with climate and extension science.”

DAE and BMD have been meeting together twice a month to coordinate activities since the November training, and experts from both departments said the joint workshop at IRI in March helped deepen the bond between the departments. “When both departments are involved in a meeting or workshop,” Uddin said, “there is more integration and it is more effective.