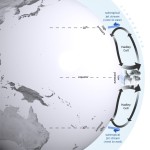 How ENSO Leads to a Cascade of Global Impacts

From February’s climate briefing, given by our Tony Barnston: The central and eastern Pacific Ocean is currently experiencing borderline La Niña conditions, but many models are forecasting an El Niño to develop this (northern hemisphere) summer. Although scientists still don’t know the exact mechanism behind the Pacific’s transition from one state of the El Niño […]

Fears of a Double Dip…La Niña

What do the economy and tropical ocean temperatures have in common? They’re both exhibiting patterns very similar to 2008. At the International Research Institute for Climate and Society’s monthly climate briefing, chief forecaster Tony Barnston focused more on the latter. He laid out the past and the present and what clues they provide about the future. The […]

Don’t write a eulogy for La Niña quite yet. “I thought it would die by this briefing,” said Tony Barnston, the chief forecaster at the International Research Institute for Climate and Society, last week. At the climate briefing, which IRI holds every month, Barnston showed signs of La Niña are still observable in the equatorial Pacific. […]