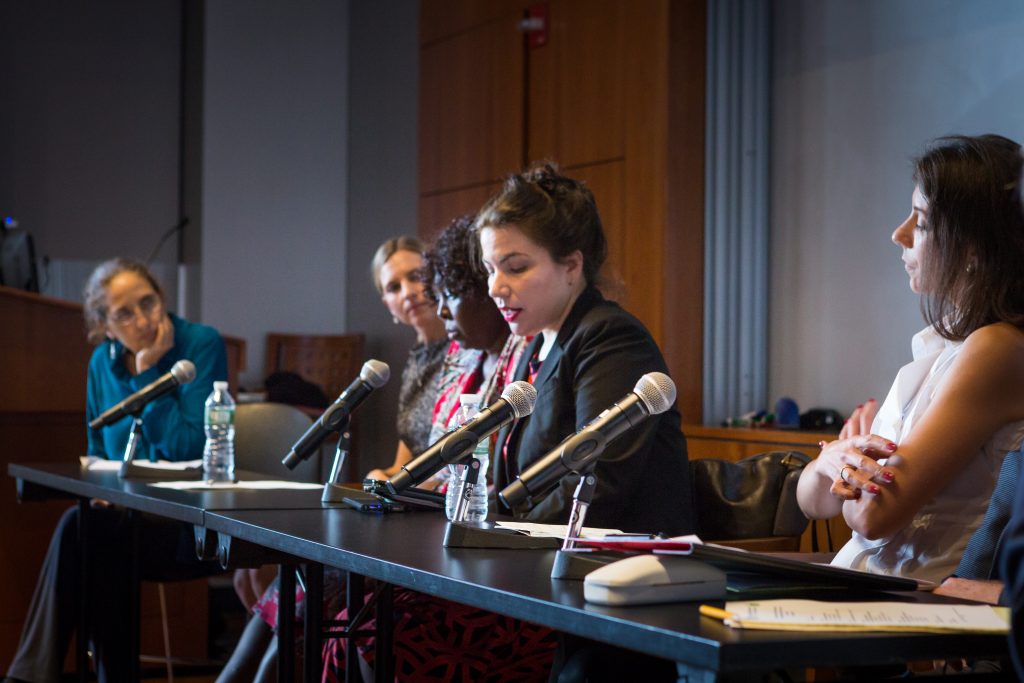 Early one evening in 1987, a fire sparked by a passenger’s lit match broke out in London’s Kings Cross station, injuring 100 people and killing more than 30. Anti-smoking activists, lobbyists and politicians went rapidly to work and within two years London’s smoking regulations had been tightened and overhauled.

Madeleine Thomson, a senior researcher at the International Research Institute for Climate and Society, recounted this anecdote at “Climate, Food Systems and Nutrition,” a panel discussion and book launch held at Columbia’s Mailman School for Public Health on October 3. Thomson and her IRI colleague, Simon Mason, co-edited the new book Climate Information for Public Health Action, a volume that outlines how policy makers, health researchers and other professionals can integrate climate research into their work.

“Never lose the opportunity of a disaster,” Thomson said, of the lessons to be drawn for climate scientists from the Kings Cross fire. She said that scientists often feel discouraged when their research isn’t being put to use without realizing that it often takes an event like a hurricane or tsunami to roil public opinion and spark political action.

“Sometimes scientists get frustrated that the science isn’t going anywhere; there is just no policy opportunity for it to go anywhere. You have to be ready. Somebody has to be there with that stack of files, who knows the whole story, who can bring in the science when needed and do it in a really timely way,” she added.

“Sometimes scientists get frustrated that the science isn’t going anywhere; there is just no policy opportunity for it to go anywhere. You have to be ready. Somebody has to be there with that stack of files, who knows the whole story, who can bring in the science when needed and do it in a really timely way.”

Thomson spoke on a panel she moderated with Mason. Panelists included experts who contributed to the book – Tamer Samah Rabie, of the World Bank; Ángel G. Muñoz of the IRI; Wilmot James, of the Columbia University Medical Center; and Jeffrey Shaman of the Mailman School.

“The book is very much a collaboration between disciplines,” Dr. Thomson said: “How should one as a non-climate person understand climate people when they’re talking and how should they understand us?”

In a wide-ranging discussion, panelists brought up various aspects of the relationship between science and policy. James, a visiting professor who has also worked as a politician and health minister in his native South Africa, provided one of the evening’s most striking examples of what is at stake: Citing a recent news article, he said that the warning system set up after the last major tsunami disaster in Indonesia in 2004 appears in large part to have failed late last month, when an earthquake and tsunami struck Indonesia, killing more than 1,400 people.

“This human tragedy highlights a number of issues about the role of legislators, policy makers and politicians in turning private information into public action,” James said, adding: “It is one thing to have good data. It is quite another matter to communicate key findings into comprehensible language that legislators and policymakers working in different countries, in different legislatures and in different political cultures can understand.”

Wednesday’s event was sponsored by Adapting Agriculture to Climate Today, for Tomorrow (ACToday), the inaugural program in Columbia World Projects. ACToday aims to build connections between scientists, government and aid agencies and agricultural workers in six developing countries, ensuring that those on the ground have the latest climate information, and can use it to grow more food to feed more people.

Wednesday’s event also included a keynote address by Shauna Downs, of Rutgers University, on the links between climate, food systems and nutrition, as well as a panel discussion on the topic. In her address, Downs outlined links between climate, food systems, and nutrition, detailing the ways in which both short-term weather fluctuations and climate change appear to be linked to phenomena like stunted growth and malnutrition. Further empirical data is needed to understand all of the effects, Downs said, while emphasizing that “climate change is affecting the food system and nutrition now.”

On the panel with Downs were IRI’s Hannah Nissan; Helen Keller International – Bangladesh’s Jillian Waid; Columbia Global Centers’ Murugi Ndirangu; and the School of International and Public Affairs’ Glenn Denning. The session was chaired by Ruth Defries, from the Department of Ecology, Evolution and Environmental Biology, and Richard Deckelbaum, from the Institute of Human Nutrition. Each emphasized that the links between poor nutrition and climate remain understudied and demand more research. “What we’re doing here is forging a new frontier, between nutrition and climate,” Defries said.

In remarks at the end of the day, Mason reflected on a lecture on chaos theory he had attended many years ago. After leaving it and thinking he had grasped all of its edges, he tried to replicate the talk for an audience in Johannesburg. It was the worst lecture he had ever given, he said.

“It really struck home to me how important it is for us to develop not only the skills but the resources to communicate complex issues in simple language that can be understood well beyond your discipline,” Mason said. “I’d like to be presumptuous and up front and say that I think [the new book] is an important step forward, and I hope that it makes a valuable contribution in enabling us as different communities – in this case, the climate and the health community – to start understanding each other.”