Authored by Elisabeth Gawthrop on December 27, 2017

Since last month’s briefing, sea-surface temperature (SST) anomalies in the area of the central equatorial Pacific Ocean that helps define El Niño and La Niña events, called the Nino3.4 region (see map below), have held at a similar average as the month before, around -0.8ºC. This number falls in the category of a weak La Niña state, although conditions will have to persist for several months for a La Niña to be officially documented in the historical record.

Because IRI and the National Oceanic and Atmospheric Administration’s Climate Prediction Center predict that these conditions will continue in the near-term, the ENSO alert level was upgraded last month from a La Niña Watch to a La Niña Advisory, where it remains. 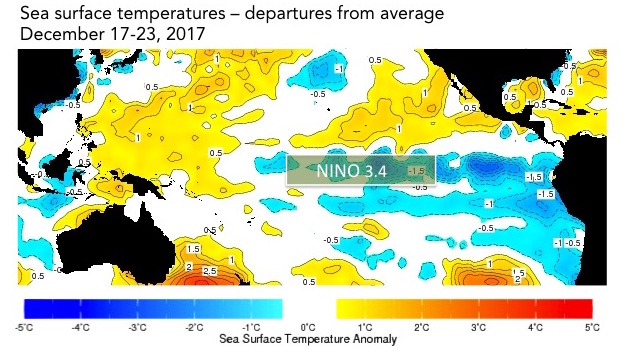 From the Earth Institute: How Will La Niña Affect Winter in the U.S.?

The average of the SST anomalies predicted by the models in this month’s forecast are very close to the predictions in last month’s forecast. Both dynamical and statistical models indicate a gradual warming over the forecast period, with both crossing into neutral ENSO territory in the March-May season. The dynamical models warm at higher rate, with conditions by next summer approaching +0.5ºC anomalies. The statistical models top out right around the 0.0ºC anomaly mark. This period at the end of the forecast, however, is past the spring predictability barrier and is highly uncertain.

The IRI/CPC probabilistic ENSO forecast issued mid-December 2017. Note that bars indicate likelihood of El Niño occurring, not its potential strength. Unlike the official ENSO forecast issued at the beginning of each month, IRI and CPC issue this updated forecast based solely on model outputs. The official forecast, available at http://1.usa.gov/1j9gA8b, also incorporates human judgement.

The official probabilistic forecast issued by CPC and IRI in early December indicates a similar overall outlook but with somewhat higher La Niña odds for the next few seasons, and equal odds of La Niña and neutral conditions for the March-May season. This early-December forecast uses human judgement in addition to model output, while the mid-month forecast relies solely on model output. More on the difference between these forecasts in this IRI Medium post.

Rainfall forecasts show some typical effects of #LaNina: above-avg precip. in Philippines & north. Indonesia. Not showing up, however, are typical above avg rains in southern Africa & typical below avg rains in Greater Horn – blame it on weak response of Indian Ocean dipole. pic.twitter.com/F0KgdO7i9W

For the upcoming January – March 2018 season, odds are moderately to strongly tipped in favor of above-normal rainfall in the Philippines and parts of Indonesia, as well as central-northern South America. Areas of northern Europe and Asia show some increased odds for above-normal precipitation, as well as parts of the interior U.S. and Alaska. The southern United States and central to northern Mexico show the strongest, most widespread probabilities for drier-than-normal conditions. Parts of South America, southern Africa, central and eastern Asia, as well as smaller, scattered areas around the world show some increased chance for drier-than-normal conditions.

What about snow during La Niña winters?