Authored by Francesco Fiondella on December 11, 2017 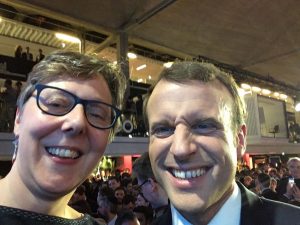 IRI’s Alessandra Giannini takes a selfie with French President Emmanuel Macron in Paris on the evening he announced the first recipients of his “Make the Planet Great Again” program to fund climate science.

Alessandra Giannini, a climate scientist at the International Research Institute for Climate and Society, part of Columbia University’s Earth Institute, has been selected as one of 18 researchers to receive funding from French President Emmanuel Macron’s “Make Our Planet Great Again” program. Macron announced the new research program in June after the United States indicated it would be pulling out of the Paris climate agreement.

Giannini is best known for her work on understanding the cause of drought in Africa’s Sahel region. Her newly funded project, selected from more than 1800 applications, will look at the physical processes underlying uncertainty in climate change projections in the tropics. She will receive support for five years, and will spend some of that time conducting her research at two laboratories in France. Giannini intends to divide her time between New York and Paris to keep her affiliation with Columbia University, where she has been for nearly 15 years.

“With this funding, I can focus more energy on my research, and not have to worry about where to get funding for climate science,” said Giannini, who was in Paris Monday night when President Macron announced the winners ahead of the One Planet Summit meeting. The meeting coincides with the two-year anniversary of the signing of the Paris Agreement by 195 countries.

The legacy of drought on food security in Mali’s Sahel

Other recipients include Princeton University’s Venkatramani Balaji, Benjamin Sanderson from the National Center for Atmospheric Research, and Camille Parmesan from the University of Plymouth, who shared the 2007 Nobel Peace Prize with other contributors of the Intergovernmental Panel on Climate Change report.