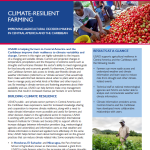 Boost for agriculture after 27 specialists graduate