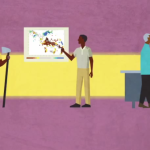 Climate resilience: it’s the ability for communities to recover from the impacts of climate events. It’s the difference between weather being manageable…or a catastrophe. But for many parts of the world, where livelihoods depend so much on the climate, critical weather and climate information is unavailable or unusable. The International Research Institute for Climate and […]