IRI climate scientist Ángel Muñoz has been given an Early Career Scientist Leadership Award by the U.S. Climate Variability and Predictability Program (US CLIVAR) for ‘outstanding contributions to national and international work to advance research and applications of subseasonal-to-seasonal predictions’. US CLIVAR is a national program that coordinates and advances climate prediction research in the […]

By IRI Chief Forecaster Tony BarnstonThis post originally appeared on Climate.gov’s ENSO blog. Reproduced with permission.  While the focus of this blog is ENSO, there are other important climate patterns that impact the United States during the Northern Hemisphere winter season.  We often focus on the winter season because that is the time of year many climate […]

Fears of a Double Dip…La Niña

What do the economy and tropical ocean temperatures have in common? They’re both exhibiting patterns very similar to 2008. At the International Research Institute for Climate and Society’s monthly climate briefing, chief forecaster Tony Barnston focused more on the latter. He laid out the past and the present and what clues they provide about the future. The […]

Attendees observed a brief moment of silence during this month’s climate briefing. Why? Because after nine months, the climate phenomenon La Niña has died. Is there any chance a zombie La Niña could rise from the dead, though? Tony Barnston, IRI’s lead forecaster, answered that question and more. This year’s La Niña was near record setting […] 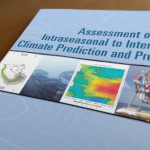