Authored by Francesco Fiondella on November 27, 2018

John Furlow is the Deputy Director for Humanitarian Assistance and International Development of the International Research Institute for Climate and Society. Before joining IRI, he was the lead on climate adaptation at the U.S. Agency for International Development’s climate change office. He also served as an author of the new U.S. National Climate Assessment‘s chapter on the impact climate will have on U.S. international interests. We spoke to Furlow about the new report’s assessments of threats to trade, supply chains, national security, humanitarian aid and other areas. 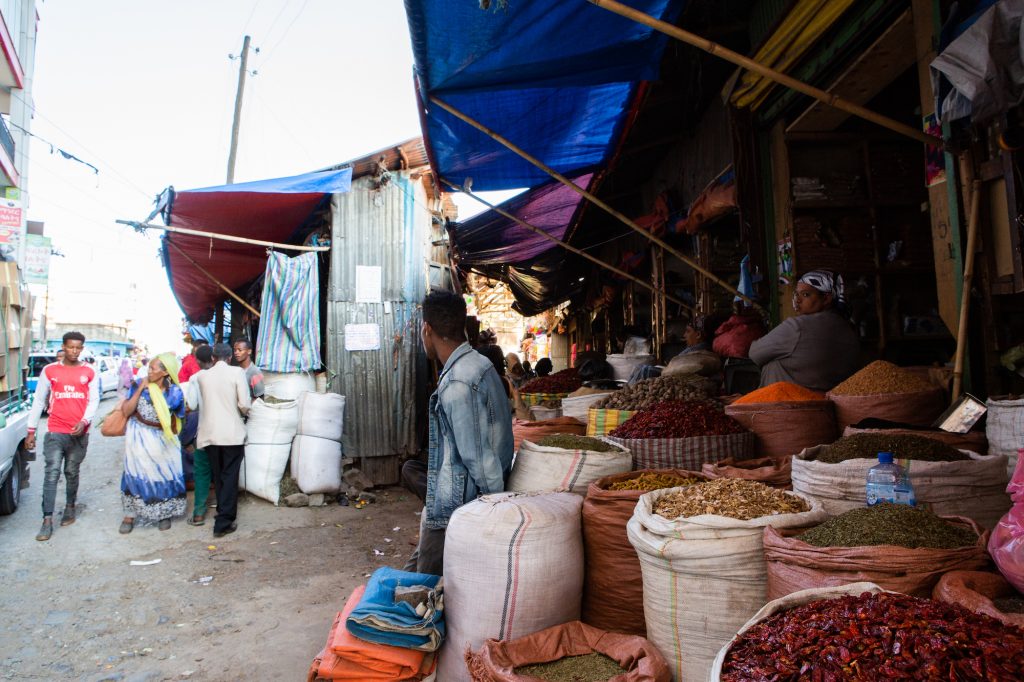 This open-air market in Addis Ababa, Ethiopia covers several square miles, serving as a central trade hub for food and other goods in the country. Photo: Elisabeth Gawthrop/IRI.

Q: This is the first National Climate Assessment which included a chapter dedicated to threats climate change has on U.S. interests abroad. Why weren’t there similar chapters in previous reports? What were the motivating factors that led to its inclusion this time around?

The NCA is a huge undertaking, and managing the workload was a concern. There was interest in including international issues in previous assessments, but there was stronger interest in conducting the assessment on the U.S. itself and trying to publish it on time. The Global Change Research Act of 1990 requires an assessment every four years (and this is the first NCA to meet that timetable), but the act isn’t clear about what must be included. There were also questions about scope of an international assessment, given that the Intergovernmental Panel on Climate Change looks at the entire world. Still, reviews of the last NCA showed that the lack of an assessment of international issues was a major gap.

It is clear that climate shocks and stresses impact things Americans care about: the U.S. economy depends on supply chains that extend into almost every continent; we are the largest funder of humanitarian aid and development assistance; we have diplomatic and military personnel and activities all over the world; many of us have families in other countries affected by storms, droughts, fires. All of these are affected in some way by weather and climate. We decided to include an international chapter but limit its scope to climate impacts on U.S. interests overseas, focusing on business, development assistance, security and transboundary issues. If the chapter is well received, the U.S. Global Change Research Program (the interagency group that coordinates federal climate research and manages the national assessment process) will include the topic in the next assessment.

Q: The reports says that extreme events are more likely to undermine U.S. international aid and investments as well as lead to increased need for humanitarian assistance overall. How has the government responded to these increased risks, and where are the biggest gaps left to fill?

The U.S. invests heavily in helping developing countries grow and transform their economies. Poor people and poor countries tend to work in activities that depend upon, or are affected by, weather and climate. Agriculture is the biggest component of the economies of most developing countries and accounts for most of the jobs. As the conversation with Upmanu Lall showed, water availability and quality are affected by climate variability, and water problems contribute to disease risks and food security. USAID and other U.S. development agencies invest in agriculture, water, health and other things that are climate-sensitive. Over the past 15 years, these agencies have been trying to reduce climate risks by also investing in climate adaptation and reducing greenhouse gas emissions by improving the energy sector and the way land is managed. In 2012, USAID wrote a new strategy for addressing climate change in development work. In 2014, President Obama signed an executive order requiring that agencies like USAID look at vulnerabilities to climate in all of their activities. This order has not been rescinded by President Trump. USAID began systematically managing climate risks to its investments in 2015, building on earlier efforts to integrate climate considerations into the agency’s work. USAID and the other agencies that provide assistance overseas are working to coordinate their efforts and learn from each other.

Q: I noticed that you refer to climate adaptation, not climate change adaptation. Is that intentional?

I was being intentional. When I was at USAID, I realized early on that when we talked to decision makers, they had trouble getting their heads around the information that comes from long-term climate projections. It didn’t matter if they were government ministers or farmers or hotel managers, the decisions they had control over were much more short-term. Farmers think about when to plant,  what to plant, when to apply fertilizer or pesticide, and whether to irrigate. A minister may worry about crop yields or food prices, and if the roads will flood during the rainy season. Somebody working in tourism is more likely to worry about the next hurricane season than whether or not hurricanes will become more frequent, more powerful, or both by 2100.

This is not to say that long term projections aren’t important. The models used to produce long-term climate projections are critical to our discussion about managing greenhouse-gas emissions. Those projections help answer two questions: will adding GHGs to the atmosphere change the climate system in ways that have consequences we won’t like? And, if so, are those consequences significant enough to consider restructuring much of the world’s economy in order to reduce our emissions?

And of course decisions about long-lived infrastructure need long term information, but that wasn’t what I was working on at USAID. Many communities are poorly prepared to deal with the current climate. I started working with IRI because it tailors its information to support decisions that are being made, every day, across the world. The IRI seasonal forecasts and its forecasts of El Niño can really make a difference to decision makers, provided they have the understanding and resources needed to act on such information.

As we worked on the international chapter of the assessment, the same realities kept coming to the fore: supply chains are affected by the weather, and corporations are concerned with weather forecasts and seasonal forecasts; international development assistance is concentrated on current activities like public health, water management and agriculture, so again, climate variability is important. There is a growing sense that being well prepared for the current climate and the surprises it can throw at you is an important first step to adapting to longer term climate change.

Q: You and coauthors write that global trade can promote some resilience by steering production of goods and services away from areas with less favorable climates to those with more favorable ones. What’s the downside?

That statement should be read carefully. It says trade can promote resilience, but it also says that it may harm some communities where production is decreased in the name of resilient supply chains. It’s important to remember that the chapter is about climate impacts on U.S. interests, not the interests of every country or community we trade with. We give an example of flooding in Thailand that affected production of computer parts and cars. Making those supply chains more resilient might mean either improving flood management in Thailand or moving production to less flood-prone areas. Either approach would likely cost Thailand, either because the country would have to invest in flood management or face the loss of jobs associated with those industries.