Outside the village of Agazzi, Ethiopia, a farmer breaks the earth apart with a plow and two oxen. 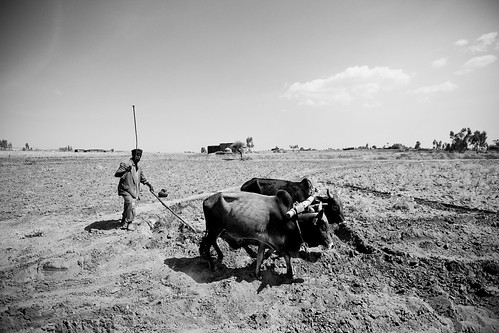 Two acres of cracked earth. In northern Ethiopia, it can be a trap that keeps farmers tethered to it for generations. Or it can be a springboard to a better life for this and future generations.

What impedes it from showing its springier qualities? You could argue the biggest pressure on the land comes from the sky above it. Northern Ethiopia’s climate is arid for half the year. Nary a raindrop falls outside of the long rainy season, which runs from June through mid-September. Sometimes even the rainy season will fail to bring adequate rains , leaving subsistence farmers exposed to more food insecurity.

Given that risk, it’s understandable why farmers have a hard time taking advantage of so-called good years, when rainfall is plentiful. “There’s an opportunity you can’t take advantage of because of climate risk,” explains Dan Osgood, an economist at the International Research Institute for Climate and Society.

Farming is a risky business no matter where you are. However, in Ethiopia the rains literally put food on the table, and there’s comparatively little infrastructure and policy in place to make up for any shortfalls. This is the epitome of climate risk.

In the U.S., crop insurance is one way farmers defray that risk, but it’s costly to offer and administer. Insurance in the U.S. is so expensive because it’s crop-based. To file a claim, an adjustor has to come out to fields and fill out paperwork. A hundred unique claims equals hundreds of hours of work at a cost of thousands of dollars. It’s this cost that keeps such insurance out of the reach of most farmers in countries such as Ethiopia.

Of course, if you turn the individual claims into one big one, you’re onto something. Unfortunately, every farmer’s field is different–from the soil composition to what’s planted each year. There’s one thing, however, that is fairly uniform over a given area: the weather.

This eighth grader became my buddy for the day, taking me on a tour of the experimental farm station in Hadush Adi, Ethiopia. He didn’t speak much English and I don’t speak much Tigrinya, but he knew enough to show me the rain gauge they use to collect data and compare it against satellite measurements.

Using weather to create insurance contracts isn’t that new. Outdoor concerts routinely take out weather derivatives contracts as do ski areas and other endeavors exposed to the climate. Farmers in the U.S. even buy insurance contracts to cover particular events, such as hail.

Looking at those products, that’s when light bulbs started to go off for economists like Osgood. “The weather derivatives products inspired the whole project,” he says, referring to the project in Ethiopia known first as HARITA and more recently as R4 Rural Resilience Initiative (there’ll be a quiz later). It brings together scientists from IRI with Oxfam, the Relief Society of Tigray, the World Food Programme, Swiss Re, and the farmers on the ground to craft village-level index insurance products.

These products are based on a rainfall index determined by the farmers in a given village. During the growing season, a satellite acts as an eye in the sky, using vegetation to extrapolate rainfall.

Mengesha Gebre Michael, the Relief Society of Tigray’s index insurance expert, examines the rainfall index in Hadush Adi during the 2011 growing season. The season proved to be below normal and farmers received a payout.

At the same time, there are many eyes on the ground (or just above the ground to be exact) looking at a rain gauge. The readings from a rain gauge in each village are written down and then uploaded about once a month when an extension agent brings a laptop to the village to validate the satellite readings. This is literally a ground-up (and up and up and up) product.

While this happens throughout the season, there are two times when rain matters most. “It’s much more about the timing of the rains than the amount of rain,” Osgood notes. “If the rains come late and you can’t plow, you’re screwed.” Ditto if the rains taper off too soon. The insurance products developed target rainfall during these crucial growing periods.

It gives them the headspace and overhead to invest in community and individual savings and also spend time partaking in community risk reduction work such as developing organic compost, planting trees to reduce erosion, and development of cash crops and orchards. In many cases, that work can also be an in-kind payment for a policy if a farmer can’t afford to pay for it with cash.

At the same time, it allows farmers to hang onto important assets. “In bad years, for example in 1993 [a drought year], if there had been this program, I would have had enough to be able to save my ox,” Alemnesh Belay, a farmer from the village of Agazzi explains. “That’s why last I paid 220 birr [roughly $13USD] for a policy. It helps.”

“This is the last piece of the puzzle,” Osgood says. “The insurance isn’t designed to overcome certain issues, it’s [designed] to provide safety, but if it’s [the insurance] missing everything else falls apart.”

Alemnesh Belay, 37, is a farmer from Agazzi. “In a bad season, you can lose everything,” she says. “If you buy insurance, you are secure.”

Some Other Important Stuff

Stepping back, its clear Ethiopian farmers are also part of a bigger puzzle. Swiss Re, one of the partners in the project, is one of the largest insurance companies on the planet with billions of dollars in contracts. In a year where insurers in the U.S. might have to pay out $20 billion to drought-stricken farmers, having a “hedge” against that will help companies make those payouts.

In addition to providing a safety net for Ethiopian farmers, another upswing of the program is helping Swiss Re cover losses in other parts of the world. It might sound odd, but in a reverse of what you’d usually expect, Ethiopian farmers could help keep U.S. farmers afloat this year. In a changing climate, with disasters on the rise, a diverse risk pool is also crucial to ensuring those who are in need have money to rebuild when they need it most.

So will index insurance save the world? Not quite. For all the good it does, there are limitations. For example, while hail can have the same impact on crops as drought, it’s very tricky to cover using index insurance techniques. It’s also very site specific. “In California where there’s a lot of irrigation, you wouldn’t do indexes based on rainfall,” Osgood notes.

Still, its great for farmers like Belay who can hold onto assets, save extra money when they have it, and maybe even take a few risks to improve their yield. It can literally mean a chance at a better life.

And in a changing climate, while sea walls and reforestation projects are wonderfully visible adaptation projects, index insurance could also prove to be just as worthy an investment.

This post originally appeared as part of the Climate Change SOS series at the Daily Kos. Photos by Brian Kahn/IRI. All rights reserved. For more images from the index insurance research trip in May, check out the full set on Flickr.