The Earth Institute’s International Research Institute for Climate and Society is leading the first of these projects. It focuses on climate threats to food and nutrition in six countries in Africa, Latin America and South Asia and involves a number of institutions and departments across the university.

“IRI is a global leader when it comes to understanding the impacts of climate risks on development outcomes,” says IRI director Lisa Goddard. “Now, with our Columbia colleagues, we’re working directly with global institutions that have far-reaching programs already in place around the world to help countries increase food security and nutrition.”

The new project is called Adapting Agriculture to Climate Today, for Tomorrow, or ACToday.

“Columbia World Projects is an opportunity to take the research university mission to a new place. Everybody is trying to expand the boundaries of what research means and how it connects to the world,“ says Nicholas Lemann, director of the Columbia World Projects. “ACToday fits our model because it’s pure research of a kind only a university can really do but it’s ready to go out and be applied in the field to real significant human benefit.”

Every year, one in nine people in developing countries go hungry for extended periods, according to the United Nations. Most are farmers and their children. Climate variability is one of the most significant threats to food systems in these countries, whose economies are still largely dependent on non-irrigated agriculture to grow their food.

The goal of ACToday is to significantly reduce this threat in two key ways. The first is to increase the production and availability of state-of-the-art climate information products and tools; the second is to improve the way such information is used in development programs, national policy, insurance and other decision making related to food systems.

The project will focus initially on Ethiopia, Senegal, Colombia, Guatemala, Bangladesh and Vietnam. Together, these countries comprise a population of almost half a billion people who face recurring climate-related risks to their food production and economies. 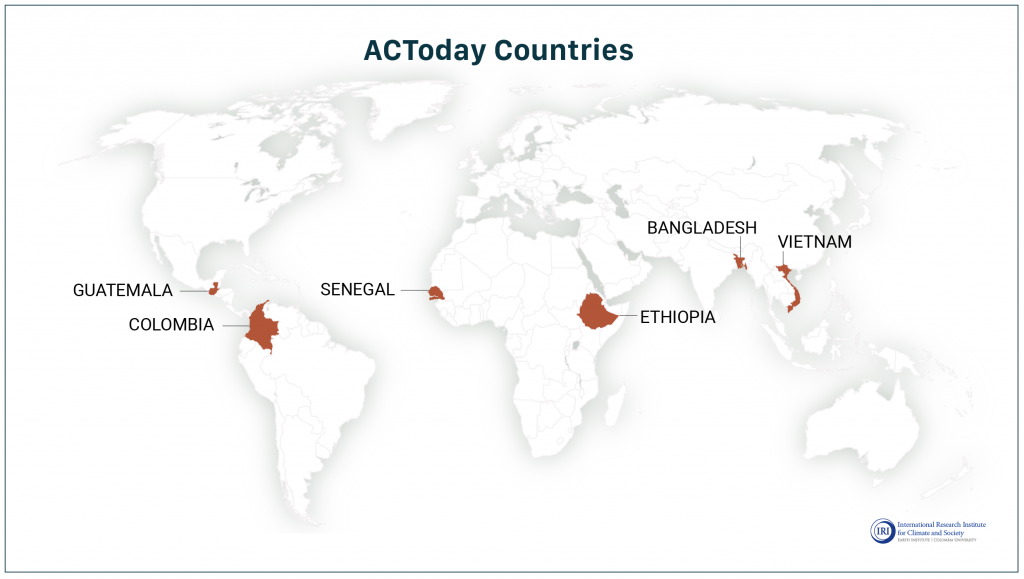 These six countries will be the focus of the Adapting Agriculture to Climate Today, for Tomorrow project.

In order to help these countries achieve their development goals, ACToday will support existing large-scale programs run by the World Food Program, the World Bank and the CGIAR.

“This is a great example of a new way of working on climate change and food systems development,” says Ruben Echeverría, the director-general of the CGIAR’s International Center for Tropical Agriculture. “Columbia is embarking on a key global initiative, and we look forward to being an active partner in its design and implementation.”

“IRI is a global leader when it comes to understanding the impacts of climate risks on development outcomes. Now, with our Columbia colleagues, we’re working directly with global institutions that have far-reaching programs already in place around the world to help countries increase food security and nutrition.”

Faculty and students from Columbia’s Medical School, Law School, the School of International and Public Affairs and the Department of Ecology, Evolution and Environmental Biology will work with IRI on the four-year project.

SIPA professor Glenn Denning says this is an unprecedented opportunity for students.

“This summer, we’re sending 12 students to Asia, Africa and Latin America to support IRI scientists and partner organizations. They will identify and advance practical ways to influence policies and investments across entire food value chain,” says Denning, an agriculture specialist who leads the MPA in Development Practice program. “This is what every student dreams of.”

Goddard says the causes of hunger are well understood and predictable.

“Repeated cycles of hunger and its nutritional impacts cause large-scale disruptions and they can be multigenerational,” she says. “For example, 315,000 women die each year in childbirth due to low iron levels. These women could be saved if they had dietary access to iron-fortified grain varieties.”

Such crops, like all crops, can be highly susceptible to climate variability. Eighty percent of the world’s agriculture is rainfed, which means billions of people are betting their livelihoods on having a favorable, predictable climate during their growing season.

A single bad drought or flood can destroy years of progress, and not just for the individual farmer. These climate events often affect suppliers, roads, processing plants, storage capacity and markets.

“Successful food producing systems are built to withstand and even to thrive across a range of potential climate events,” says IRI’s Walter Baethgen, whose prior work in Uruguay created much of the inspiration and momentum behind ACToday. “They do this by using good information effectively, combined with financial tools like insurance for added protection against some of the climate risks.”

Baethgen says that climate information is still underutilized in developing countries despite improvements in our ability to monitor and predict climate swings. As a result, poor climate planning not only threatens national investments in years dominated by adverse climate events, but it also prevents countries from taking full advantage of good years, when rains are plentiful, for example.

“At Columbia, we have the scientific knowledge and experience to help our partners reverse this situation, not over the next thirty or forty years, but in the next five,” he says. “If we are successful, we will improve the lives and health of millions of men, women and children.”