Improving the Water Outlook in the Himalayas

Andrew Robertson, a climate scientist at the International Research Institute for Climate and Society, discusses his research on helping reservoir managers in northern India make better planning decisions by improving their ability to predict how climate change will influence water availability. In order to do this, Robertson worked with colleagues at the Columbia Water Center and the […] 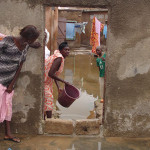