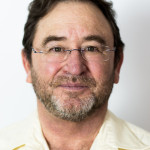 After receiving his computer science degree from the Univ. of Colorado in 1983, John del Corral joined the EPA-funded Acid Deposition Modeling Project, headed by Julius Chang, at the National Center for Atmospheric Research. He participated in the Regional Acid Deposition Model (RADM) model development and analysis of model results, moving with the project to the Atmospheric Sciences Research Center at SUNY, Albany in 1987. In 1991, del Corral joined Prof. V. Ramanathan’s research staff at Scripps Institution of Oceanography, as a scientific programmer, supporting the research in the Center for Clouds, Chemistry, and Climate. This included field participation in CEPEX and the planning phase of INDOEX.

While at Scripps, del Corral joined the IRI Forecast Division in 1997, supporting the work of the Forecast Division as computer and network manager, and Web site developer and manager. In 1999, he accepted a scientific programming position at the Bren School of Environmental Science and Management at UC Santa Barbara. There he contributed to the development and validation of global and regional mineral dust transport models, under the direction of Prof. Natalie Mahowald.

He is interested in the role of computers and computational science in multi-disciplinary areas of geophysical research. This includes high performance computing, graphical techniques, geographical information systems, database technology, semantic technology, and learning the basic science in the areas of research.

Currently part of the Climate Monitoring Division at the IRI, del Corral is actively involved in the maintenance of and upgrades for the IRI Data Library. He has recently developed a “standalone” version of the Data Library that can be used for training purposes, or mirror site deployment. His projects for the Data Library involve the use of GIS, databases, and semantic technology.